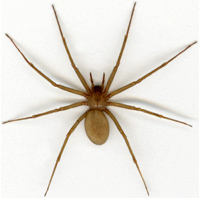 The loxosceles recluse, also know as the violin spider, is a small-sized arachnid of approximately 7-12 mm long.  The color of the brown recluse spider is normally brown.  Its body shows a cephalothorax with a dark brown violin-shape; the legs are light brown and the oval-shaped abdomen is dark brown, yellow, or greenish yellow.  The most important characteristic is the presence of 3 pairs eyes in the cephalthorax.  Should you believe that these spiders are present in your home, IT IS CRITICAL that proper identification be established prior to treatment. 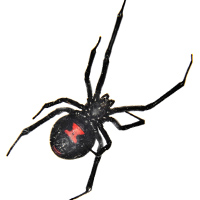 The body of an adult black widow is about 1/2″ long.  The female black widow is normally shiny black, with a red hourglass marking on the underside of its abdomen.  The markings can vary in color from red to yellow to white.  The hourglass may be visible or you may see dots.  The bite of a black widow is toxic and can cause harm.  Should you believe that you have been bitten by a black widow, you should seek medical attention!  A proper inspection by All Things Exterminators, Inc. will help determine what type of spiders are in/around your home. 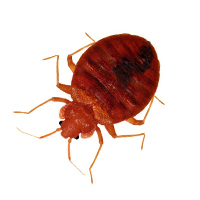 Sleep Tight!  Don’t let the bed bugs bite! Unfortunately, bed bugs are real and running rapid!  How do they get into your home? They are traveling on us.  We are their carriers. We pick them up anywhere. Bed bug adults are approximately 3/16″ and are reddish brown in color. They are wingless and can typically be seen with the human eye.  It is much more difficult to see the immature states as well as the eggs.  They can hide in many different areas including but not limited to headboards, baseboards, screw holes, and many tight confided places.  It is very important to have an All Things Exterminators, Inc. thorough inspection performed to determined the level of infestation. 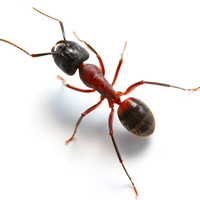 Worker carpenter ants from a single colony range in size from 1/4″ up to a large 1/2″.  Carpenter Ant Queens are as large as 3/4″.  Foraging ants can be active in many location.  During waker days a number of winged ants may swarm inside, and they are usually mistaken for termites.  Typically, this is 3-year-old nest with more than 3000 workers.  When termites swarm, they drop their wings immediately while carpenter ants retain their wings as they look for a new nest site.  Most times this ant will be found around rotted wood.  These ants can cause large amounts of damage to structures.  It is important to have a thorough inspection from All Things Exterminators, Inc. to determine colony locations. 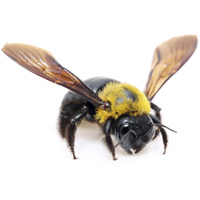 They are solitary bees which burrow inside wood materials such as wood patios, decks, rails, eaves, and other wood products.  One of the tell signs of their invasion is the sawdust piles they leave behind.  They can be up to 1″ in size.  They are shiny with a moth hairless abdomen.  The males are relatively harmless, while the females have stingers.  They can easily be mistaken for bumble bees.  Since they are a wood destroying insect, it is very important that All Things Exterminators, Inc. perform a thorough inspection if you suspect these insects! 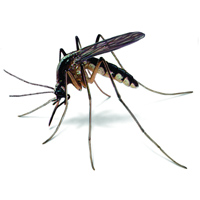 They are insects that belong to the order Diptera.  There are over 2500 different species throughout the world. They have 2 wings and long piercing sucking proboscis which they use to pierce skin.  While the males are not suitable to pierce, the female is very capable and feeds primarily on human and animal’s blood.  They are know to transmit many forms of diseases such as malaria, yellow fever, and others.  There are many contributing factors to mosquitoes, and it is important to have a thorough inspection to eliminate these factors. 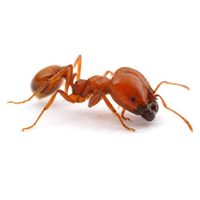 One of the first signs you will see in a mound of soil!  This can usually occur days after a heavy rain.  However, there won’t be an opening in the top of the tunnel because they use underground tunnels to enter and exit.  These mounds can reach up to 18 inches in height.  Fire ants are typically from 1/8 to inch long.  They are very aggressive ants.  Hundreds can attack at any given time ~ stinging their victim.  Should you believe that you have fire ants, IT IS IMPORTANT you do not disturb the colony.  With the right inspection from All Things Exterminators, Inc. we can identify the insect and offer the right solutions. 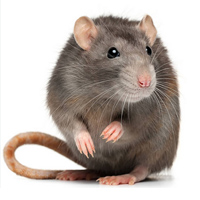 The Norway Rat has an average body weight between 10 oz to well over a pound.  The body is heavy and usually between 7″ and 10″.  It has a long head, blunt nose, and a tail usually about 6-inches long.  The ears are small and color is brown to black on the back and sides, and gray to yellow on the belly.  Their droppings are blunt and have an average length of 3/4 inch.  The Norway Rat will eat about 1 oz of food per day.  They produce anywhere from 30 to 180 droppings.  They can produce 6 -18 pups in a litter with 3 – 7 litters per year.  Adults can live about 18 months.  There are many signs that can be discovered with a proper inspection.

The Roof Rat has an average body weight is 6 to 12 ounces with a long slender body and usually 6 to 8- inches in length.  They have a pointed nose, large ear and a long tail.  Their droppings are pointed and average 1/2″ in length.  The roof rat will each an ounce of food and drink an ounce of water each day.   This produces 30 to 180 droppings per day.  They have 6 – 14 pups in a litter with 3 – 7 litters per year.  Adults live to about 18 months. There are many signs that can be discovered with a proper All Things Exterminators, Inc. inspection! 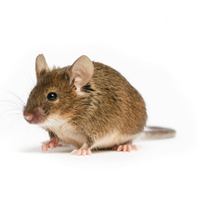 The house mouse can weigh from 1/2 to 3/4 of an ounce.  The average body length can be from 2.5″ to 3.5″.  They have a 3 to 4-inch long tail, large ear and they are typically gray on their back and lighter gray on the belly.  Their droppings are pointed and average about 1/4″ in length.  the house mouse can eat 1/10th an ounce of food per day and drink 1/20th an ounce of water.  Their droppings produced are around 50 per day.  They can produce 6 young in a litter and 8 litters per year.  Adults can live about 15-18 months.  They are very curious creature and can forge 50 feet from their nest. There are many signs that can be discovered with a proper inspection. 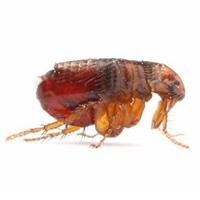 Fleas are reddish-brown to black in color and can be determined with the human eye.  They can range between 1/16″ to 1/8″.  They are wingless insects with flattened bodies.  They have tube-like mouthparts used to pierce the skin of their prey.  These insects can be found on mammals where they will be extracting a blood meal.  Fleas have long legs for jumping and are able to jump up to 7 inches vertically.  Flees can be found nesting in many areas.  So, it is important to have a thorough inspection to determine point of origin. 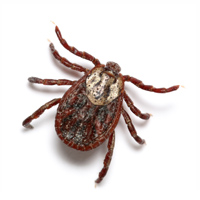 There are many types of ticks.  The most common tick is the American Dog Tick (Dermacentor variables). This is the most frequently encountered tick and is also sometimes known as a wood tick.  The adult American Dog Tick can feed on humans and medium to large mammals.  Males and females who haven not fed are reddish-brown and about 3/16-inche long.  Females have a large silver-colored spot behind the head and after feeding, the can become 1-inch long.  Males have fine silver lines on the back and typically do not change size after feeding.  In Tennessee, the adults are most active in: April, May, and June.  The American dog tick can transmit Rocky Mountain Spotted Fever, tularemia, and possibly ehrilichiosis to humans.  It is important to get a thorough inspection from All Things Exterminators, Inc. to determine what type of tick infestation you may have. 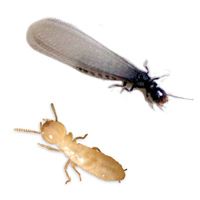 Subterranean Termites have a broad waist, straight atenae, and a pair of equal length wings. The have a caste system comprising of kings, queens, workers, soldiers, supplementary reproductives, nymphs, and eggs.  Their tunnels are built out of mud, which enable them to travel to their food source.  Their food source is cellulose found in wood products.  The work 24 hours a day, 7 days a week, 365 days a year to reach their target.  They can easily be mistaken for ants so it is very important to have a thorough inspection to reveal any evidence of a termite invasion. 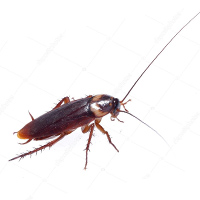 There are different types of roaches that can invade your home. Some of these roaches include American, Oriental, German, and Brown Banded.  Each cockroach has distinguishing characteristics which separate it from the other.  the nesting sites for each vary as does their methods of entry.  The most common roach is the German Cockroach. Typically, it  can be found  in kitchens and bathrooms where water sources exist.  The female German Cockroach can produce 30 to 50 eggs at a time.  Proper identification is key in performing the right type of treatment to control these pests.  that is why it is important to have a thorough inspection performed by All Things Exterminators, Inc.!

Outside Invaders- With a Proper Inspection, it can be determined what type of insect is invading your home or business. 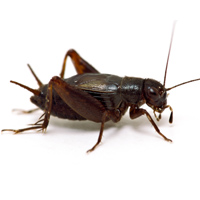 Field Crickets are typically 15-25 millimeters in size, depending on the species and can be black, red, or brown in color.  While both males and females have similar basic body plans, each has its own distinguishing features. 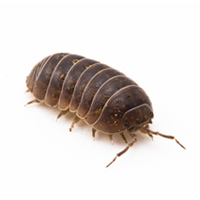 These bugs get their name from rolling in a ball when bothered.  They do this to protect their soft underside.  Pill bugs are about 0.6 inch long. 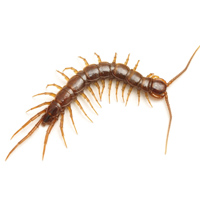 American Centipedes can range in size from 1/8″ to 6 inches.  They are worm-like and usually yellowish to dark brown in color, sometimes with darker stripes or markings.  They have one pair of legs per body segment ranging from 15 to 177 pairs.  They can be found both indoors and outdoors. 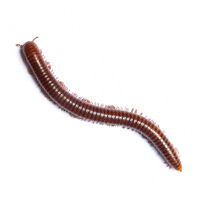 These little creatures are called Thousand Leggers.  They have a hard shell body consisting of cylindrical segments. They have 2 pair of short hairlike legs per body segments.  They are typically found around decaying matter and damp areas. Make sure you have a thorough All Things Exterminators, Inc. inspection to protect your house and business from this crawly creature! 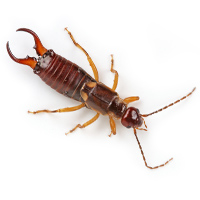 Known as pincher bugs, Earwigs have slender flattened bodies, bead-like antennae, and are easily recognized by the pair of large pincher on the tip of the abdomen. Typically, since they are sensitive to yea and dryness, you will find them in cool, dark places.  However, at night time, when temperatures are right, it is possible to see them active. 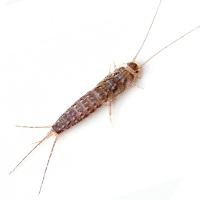 These guys grow to up to 1-inch long.  They have long, slender silvery bodies that are flattened.  They are wingless and have 3 filaments extending from the abdomen. Their abdomens taper at the end, giving them a fish-like appearance.  They are often found indoors in damp areas.  Silverfish are agile runners and can outrun most of their predators (including wandering spiders and centipedes). However such running is only possible on horizontal surfaces, as they lack any additional appendages and, therefore, are not fast enough to climb walls at the same speed. They also fear the light. 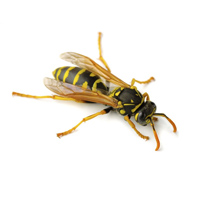 Averaging 3/4″ to 1 1/2″ long, they are yellow and black. Their nests are made of grayish brown papery material.  Paper wasp nests are relatively small, contained 4 to 30 wasps per nest.  Paper Wasps attack when aggravated and have a painful sting.  They can also sting multiple times and do not loose their stinger.  They are typically found outside but can be found indoors as well.